So how does Mr. Bacon and I spend a day off together with only one kid at home?  Baking in the kitchen of course!  Well not every day but we do enjoy cooking with each other.  Lately we've been discussing breakfast ideas for our busy mornings. We do stock our freezer with plenty of homemade pancakes and waffles made from my home made mix.  But we were wanting something with more protein in it and eggs always make a good breakfast.  We were looking to put egg bake into a easy, single serve breakfast.  So we started brainstorming some ideas and we came up with egg bake muffins. 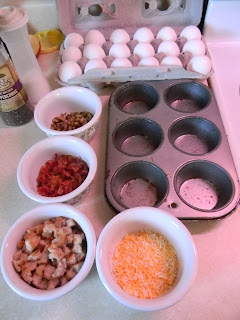 Out came the ingredients!

Lots of great fillings for our egg bake.  That was the easy part!  How to assemble them was where Mr. Bacon and I had differences.  His idea was to layer the ingredients in the muffin pan and then add the scrambled egg over the top. Not bad but I thought it might be better mixing all ingredients in a bowl and pouring them in the pan.  Who's idea was better? We'll find out. We figured we'd  try out different types of egg bake in each muffin cup.  So we got busy mixing.

I mixed up all my ingredients in my bowl, and Mr. Bacon got busy layering.  Each has one egg mixed with milk and seasonings, hash browns, mushrooms, bacon, sausage, and cheese.  Make sure before you put anything into your muffin pan, you grease it well first. 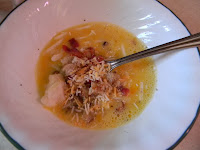 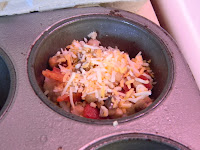 Here they are side by side. They don't look much different right now. 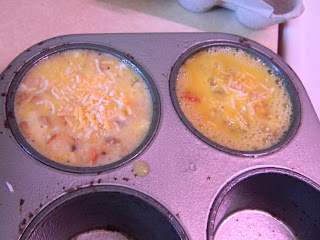 After seeing them side by side, Mr. Bacon did admit he thought mine might turn out better.  So we decided to mix up a few more of the mixed one's since Bacon Bit could eat three all by himself!   During my mixing, I was a bit distracted and I noticed I didn't add in the hash browns.  No problem, we decided it would still make a good experiment for us.  We filled the two middle cups full and decided to only fill the other one 2/3's full to see if that made any difference. 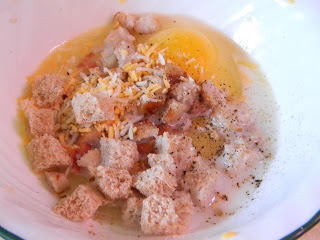 Then there was one lonely cup left.   I decided it might be good to try one like the egg bake recipe I have. I mixed up one egg, a splash of milk, seasonings, bacon, sausage, and about 1./3 of a slice of bread diced up.  Mixed it all together and dumped it in.  Now they are all ready for the oven. 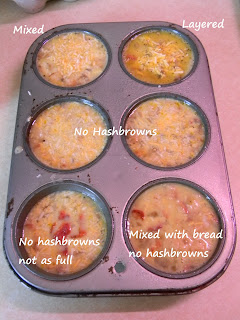 Since we were only trialing out our egg bake muffins we only made up a small 6 cup muffin pan. And to help save on electricity we popped them in our toaster oven to bake them up. 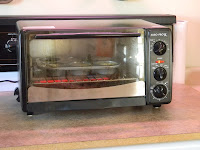 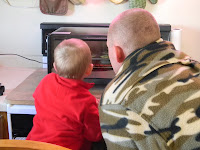 Bacon Bit thought it was just as fun to watch them get big as Mr. Bacon!  It took them about 25 minutes at 350* to turn golden brown and get fluffy.  Your oven may be a bit different, especially since these were cooked in a toaster oven, so watch them starting around 20 minutes. 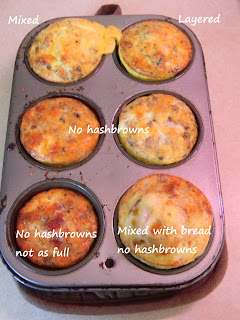 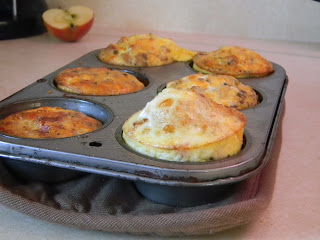 I have to say we were surprised they all popped out of the pan just fine with no sticking. Mr. Bacon was a bit worried that when he layered the hash browns on the bottom of his muffin pan they might stick. 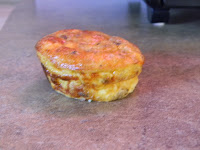 Here is the 2/3's full muffin with no hash browns in it.  This one we decided to put in the freezer to see how it would taste re-heated.  I'll let you know how that turned out in a a bit.
Wonder how do they look from the inside? Delicious! 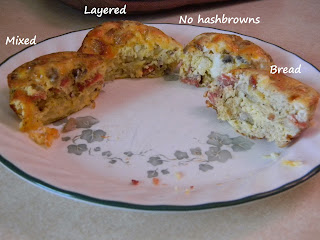 Like any good food critiques, we sat down with half a muffin of each to taste test them.  Yes we have quite hot dates huh?!   The verdict is in and the mixed egg muffin tasted the best.  The layered one was good, but you could taste each layer and the hash browns at the bottom seemed too mushy without being mixed together with all the other ingredients.  The muffin with no hash browns wasn't bad, it tasted more like an omelet.  But we both preferred the hash browns added in.  As for the one with the bread, it was just too much bread in it for our taste.

The best thing with these, is you can specialize them to everyone's liking.  All the kids except Bacon Bit think we are poising them when we add mushrooms to anything. So we can leave them out when we make their muffins.  I can't wait to remake these this weekend and let the kids design their own eggs.

As for that frozen egg muffin, it re-heated perfect!  About a minute in the microwave and you have egg bake for a busy morning.  We waited to try it until Bacon Jr. was home and let him have a say in how it tasted too and he can't wait to have them on busy school mornings. And he's excited to help make them next time too!  And what did Bacon Bit think of them? 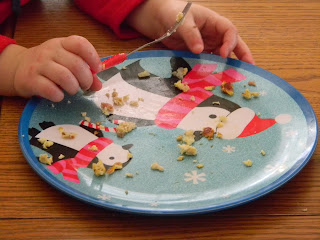 Well he ended up eating almost three of them, just like predicted!  I'd say they were successful!

Need to see a bigger picture? Just click on it.